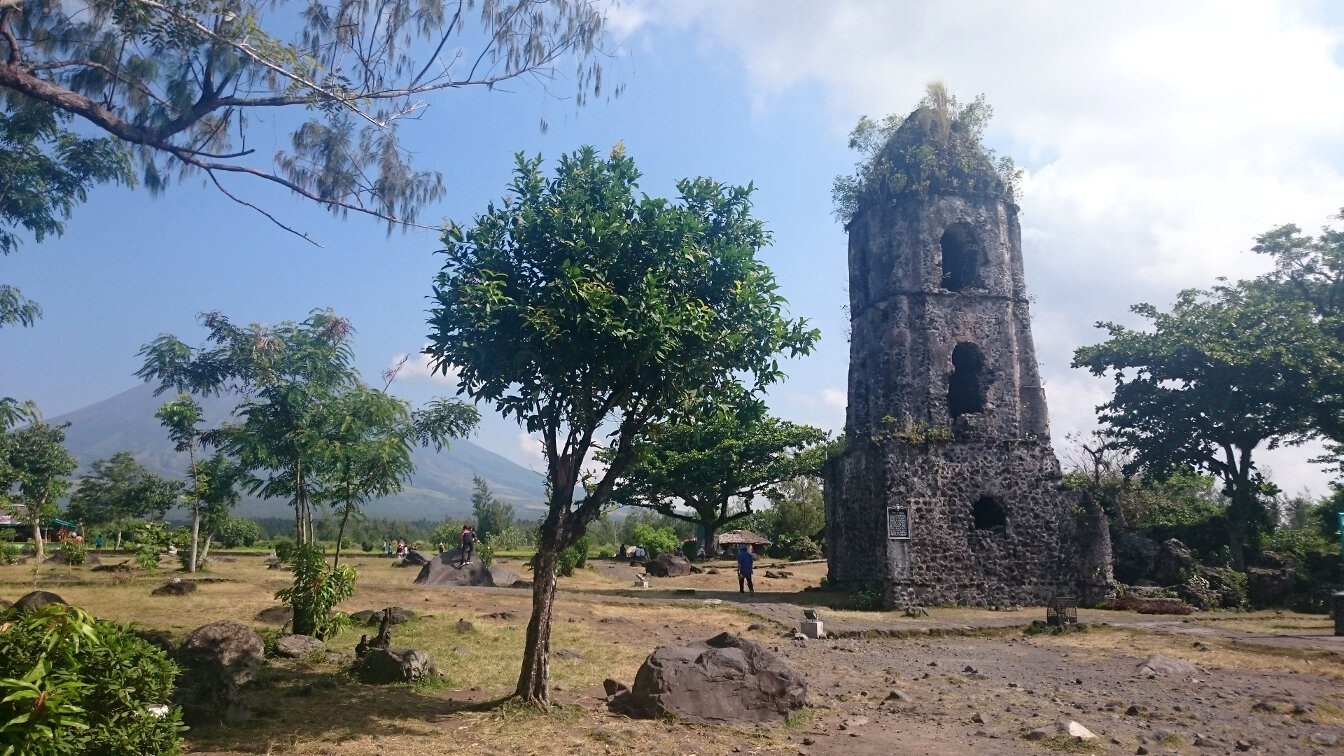 I decided to take a trip out of the city of Legazpi to explore a few other spots in Albay province. My goal for the day was nearby Cagsawa  a small village just west of Legazpi on the the tourist map mainly for one thing: the Cagsawa Ruins.

The ruins are of a baroque church that was constructed in 1724 and was laid in ruins by the 1824 eruption of Mt. Mayon that can be seen clearly from the site of the ruins. During the eruption several hundred villagers are said to have sought refuge inside the church and met their end as it and the surrounding village was destroyed by ash and hot mud slides from the volcano.

Recently some evidence has surfaced that seems to point to the church actually not collapsing because of the eruption. Pictures from the 1930s of the church facade still standing have been discovered. You can read more about this controversy in an article from the Bicol Mail.

Journey To The Cagsawa Ruins

I hopped on a jeepney bound for Polangui and 30 minutes and few Pesos later I was dropped of in the heart of downtown Cagsawa. From the main little square welcoming to Cagsawa it was just a quick right hand turn down a path leading to the ruins.

Before arriving I passed several ATV Vehicle rental operations all keen to rent me an ATV to drive around some muddy trails. A perfect way to take in the local history and think of those that lost their lives to the eruptions of Mt. Mayon.

I However declined the offer and soon found myself at the entrance to Cagsawa Ruins Park!

To enter the park you pay an entrance fee of 10 Peso bringing the total of a return trip from Legazpi up to all of 30 Peso.

On The day of my visit and I imagine most days the park was full of mostly Filipino visitors taking group photos, exploring the ruins, eating and buying souvenirs at the shops in the park and taking more group photos.

I joined them in these activities and also took a short film of me walking around the grounds of the park.

The Belfry which is the only part of the church still standing is very pretty and everything in the area around Legazpi is given a big boost by the sught of Mt. Mayon in the distance and here it gains an extra dimension as you walk through the ruins thinking about the perils of living so close to a volcano.

After enjoying some locally produced chili flavoured ice cream and also having a quick walk around the Cagsawa village I headed back to Legazpi on the first jeepney heading east.

Another successful day in the life of this vagrant!

Read More about the Cagsawa ruins at: